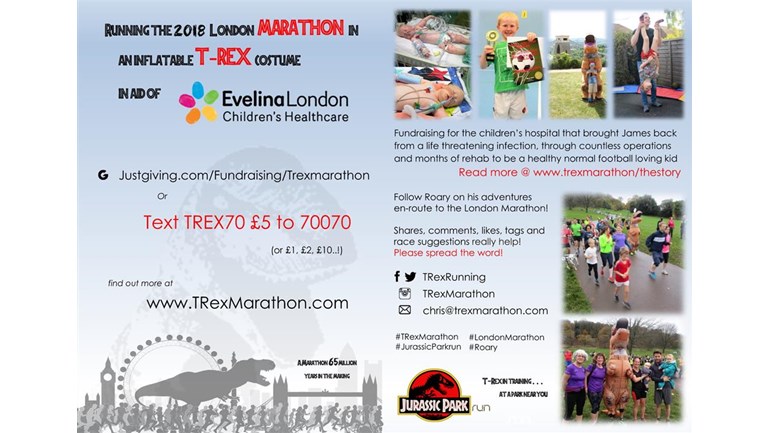 Running the London Marathon as an Inflatable TRex! for Evelina London Children's Hospital because of the inspirational story of my cousin James

We raise money so that Evelina London Children's Hospital can fund life-saving equipment, life-changing research and provide the little comforts that make hospital less scary for our youngest and most anxious patients. We are part of Guy’s and St Thomas’ NHS foundation trust.

This chapter maybe over but I'm still aiming to raise money for charity including the Evelina London Children's Hospital!  Check out my new virtual racing / virtual running venture at Rundraise Virtual Races

My name is Roary (or by human name Chris) and I'm running this years London Marathon on April 22nd as a 7ft+ inflatable T-Rex!  I'll be joined by my almost father-in-law Phil Parker as a park ranger!

I'm raising money for the Evelina London Children's Hospital who nursed my cousin James back to health from a lift threatening infection when we was only 20 months old.

James was on holiday in Portugal with his parents Bob and Maia, where he fell over a rock and grazed his elbow, clearly nothing much was thought at the time.  A few days later back in the UK he started developing a high temperature, went to the GP, they sent him home with Calpol, but he quickly worsened and ended up going to A&E in an ambulance.   Now in intensive care it emerged that whilst his initial infection was probably a very common staphylococcus infection, it had morphed into a new strain of the virus which was the 2nd case documented in Europe at the time, which was now much like an MRSA super bug, unresponsive to antibiotics.    The infection was eating away the flesh in his upper arm, and only narrowly avoided reaching his brain, so he was very close to losing his life.   Slowly they managed to suck out the damaged tissue and treat with antibiotics, operating on him almost daily for a couple of weeks. The operations continued less frequently for another month on the ward, with physio and a variety of healing contraptions.   Further operations then involved transferring growth plates from his leg, to his arm to hopefully enable some growth, which then needed screws in his ankle to keep that stable…  Recently these screws have been removed, and whilst the success of the operations on his arm will only be learnt as James grows, recently turned 7, he doesn’t let this stop him winning football trophies, hanging one-armed off climbing frames, and pleading for me to swing him round by the legs on a trampoline!

It was a horrible thing to happen to a 20 month tear old,
at a time when we he was just starting to communicate and walk well, so the whole ordeal was an obvious set back.  Being on a ward for 6 weeks, being under anaesthetic so many times must’ve been really tough and confusing for him.   But he didn’t seem to get phased, and he doesn’t get phased by any of his physical differences now, or further treatment he has to have.  The staff must’ve done such a good job in keeping him entertained, and importantly keeping him educated, at a big time in his development of speech and language.  He’s very bright and physically active for his age which is against the odds in my opinion.

I think unfortunately the NHS and their staff do not appear to get the funding and wages that they deserve.  I’m obviously not an expert, but I imagine the first things that go when the budget is tight are the non medical things, like books, toys and educational staff.  But for James and for any child at such a young age this is so important.  Any support I can give to research medical equipment and books, toys, blankets…even if it’s only a drop in the ocean, it might at least help 1 child somewhere, and that makes it worth it.

So why am I running as a dinosaur?  Well, a) James likes dinosaurs, b) I like dinosaurs and c) everyone loves dinosaurs!  I’ve seen this costume in action a lot on youtube and was yearning for a good excuse to buy one…. Maybe running a marathon in one wasn’t the best idea!

I’m not exactly a seasoned runner either.  I started running in December 2015,  did my first half marathon in October 2016 and then my first marathon in April 2017 (Brighton Marathon).   I finished and said ‘never again’.  Two weeks later watching my father-in-law go round the London Marathon for the 4th time, I started planning this little challenge…    I’d seen these dinosaur costumes all over Facebook on videos, doing ridiculous things, so I kind of wanted a costume, and this was a very good excuse to buy one!    I’ve since done the Bournemouth Marathon in October in 3 hrs 30,  my second marathon, so I’m certainly not an experienced or good for age runner.   But I do love a challenge.

Training wise for this I haven’t been running round the
streets in costume but I’ve been doing a lot of ‘Jurassic Parkruns’ around Bristol and London and a few longer runs including a half marathon on Wimbledon Common.

Thanks for reading, hope to see you at the start line,
and If I make it round…the finish line!

We raise money so that Evelina London Children's Hospital can fund life-saving equipment, life-changing research and provide the little comforts that make hospital less scary for our youngest and most anxious patients. We are part of Guy’s and St Thomas’ NHS foundation trust.

Charity Registration No. 1160316
Find out more about charity fundraising