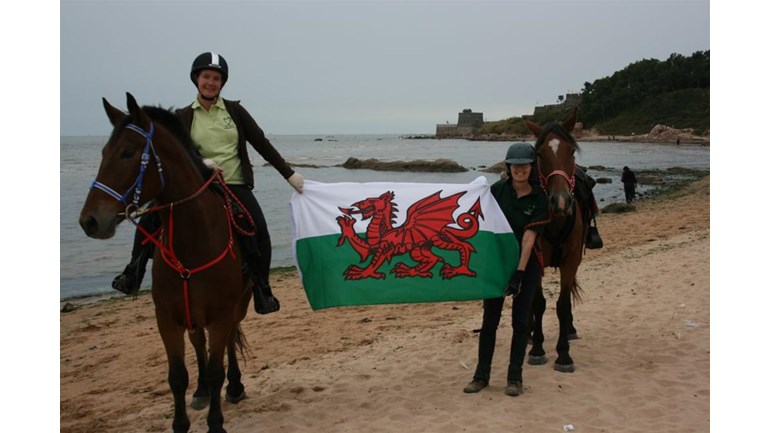 The Long Horse Ride started as a journey on horseback from Beijing to London between the Olympics, through the steppes, deserts, mountains and forests of China, Central Asia and Europe. Having achieved my initial goal and also having completed the first coast to coast horse ride across Eurasia on record,  I am now planning in Spring 2014  to start riding across North America from the easternmost point of Newfoundland.

The ride is for a very worthy cause. Challenge Aid helps disadvantaged children to achieve the educational benefits they would otherwise do without. See the website at www.challengeaid.org  for other life-changing projects they support worldwide.     None of the money you donate will be used by ChallengeAid for administration costs, SO EVERY PENNY REALLY WILL COUNT

In October 2008, together with Rowena Haigh, Ren Hong and Peng Wenchao, I completed the trial leg of the ride from Old Dragon's Head, where the Great Wall of China reaches the sea, to Badaling in Beijing district.

The ride was then officially partnered by the Chinese Equestrian Association and in April 2009 I set out again with two Chinese companions to ride on Shandan horses to the other end of the Great Wall at Jiayuguan. Unfortunately after only nine days riding, I fell off my horse, snapping my collarbone, breaking six ribs and puncturing a lung. Three months later we set out again, and successfully reached the western end of the Great Wall at Jiayuguan in October 2009. In doing so, I became the first person on record to ride the entire distance from one end of the Ming Great Wall of China to the other on horseback.

In 2010 I continued along the northern Silk route across the Gobi desert, along the Tian Shan mountains and halfway across Kazakhstan. The following year 2011, I travelled another 1000 miles across Kazakhstan and then across Russia and Ukraine.

After three months coping with border wrangles, 2012 saw me riding through the EU countries to complete the first coast to coast horseback crossing of Eurasia on record.  I arrived at the Royal Artillery Barracks in Greenwich in July 2012 and handed over an Olympic flag I had carried from the Chinese Equestrian Association in Beijing to the chairman of the British Horse Society at a reception in the presence of HRH Princess Anne.

I have since ridden across the UK and Ireland to reach their westernmost point - NEXT STOP NEWFOUNDLAND!!

Your donations will make all the broken bones and hours in the saddle worthwhile!

Donating through this site is simple, fast and totally secure. It is also the most efficient way to sponsor me: Challenge Aid will receive your money faster and, if you are a UK taxpayer, an extra 28% in tax will be added to your gift at no cost to you.

Umpteen thanks for your support!

ChallengeAid promotes health and fitness throughout the UK by motivating schools, universities, corporate groups and individuals to undertake physical Challenges. Through the money raised by sponsorship ChallengeAid focuses on “Schools of Hope” in some of Africa’s most impoverished slums.