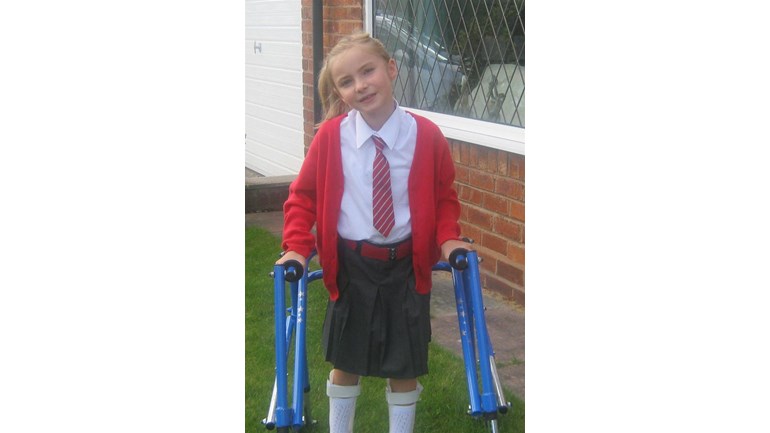 Ariella, 7, dreams of being able to dance but she needs a £60,000 operation to be able to walk.  A single mum from The Wirral faces a desperate race against time to raise £60,000 for a life changing operation in the United States for her daughter. Suzanne Byrne stands in her living room with her daughter and pretends to dance, but without her Mother’s support seven-year-old Ariella would not have the strength to stand. Ariella has Spastic Diplegia Cerebral Palsy and can only get around with the use of a wheelchair or by leaning on a standing frame as her legs can’t hold her weight. At seven-years-old Ariella is at an age when she wants to be playing with her friends or starting to take up hobbies like dancing, she frequently gets visits from the children of neighbours asking if she wants to play but Suzanne can’t bare the thought of her daughter being outside on her own. “Ariella is a bright and beautiful little girl, she desperately wants to walk and is determined to dance one day but without this operation I fear her childhood will slip away and she will not fulfil her dream.” said Suzanne. Spastic Diplegia Cerebral Palsy is a permanent brain injury from birth which causes painful spasticity in the limbs and which prevents Ariella from walking independently. She has to wear uncomfortable leg splints every day and relies on a wheelchair or standing frame. Following Ariella’s diagnosis, her future looked bleak, and the family were faced with a lifetime of operations, botox injections and physiotherapy to ease the rigidity of her muscles to try and make her more comfortable. That was until Suzanne discovered a ground-breaking operation available in the United States which was releasing muscle tension in Cerebral Palsy sufferers and, in some instances, allowing them to walk independently for the first time. Suzanne commented on the discovery: “Nobody wants to consider their child’s future and face the prospect of endless operations, painful physiotherapy. I want my beautiful little girl to walk, run and dance just like she wants to.” “By talking to other parents in a similar situation I heard about the treatment in the United States and then discovered how successful it had been for other children, I knew it would save Ariella lots of pain and discomfort as she got older and made an appointment to ask our specialist about it.” The treatment is called Selective Dorsal Rhizotomy and involves cutting some of the sensory nerve fibres that come from the muscles and enter the spinal cord. The complicated procedure reduces spasticity and it becomes easier for patients to increase strength with therapy and exercise. Children who have received the treatment can often start types of exercise that were impossible before. The operation is not currently available on the NHS and the Centre for Cerebral Palsy Spasticity in St Louis, Missouri are the World’s leading specialists. Now, the family from Bebington are doing everything they can think of to raise funds for the treatment at the St Louis Children’s Hospital, but time is running out as they need to raise £60,000 in just 5 months.

National charity, Caudwell Children, is supporting Ariella and other children like her by raising money to fund ground breaking treatments and physiotherapy which can help children with Cerebral Palsy walk independently for the first time.

Head of Public Relations at Caudwell Children, Ben Sutcliffe, commented: “We have witnessed the difference this operation can have on a child’s life and therefore we are offering our full support to the family’s fundraising campaign. Together, we need to raise a lot of money in a short period of time to give Ariella and other children with cerebral palsy the independence they deserve, so I urge anyone who may be able to help to contact the Charity.”

Suzanne added: “Without this treatment Ariella is going to end up being a full time wheelchair user and will miss out on some of the things she is desperate to do, simple things like dancing in front of the TV when we watch ‘Strictly Come Dancing’. I know I am lucky in that Ariella is not terminally ill and there are lots of people in a worse situation than me but I just want to give my beautiful little girl the best life possible, I would give anything to see her dance or even just run around with her friends.”

Anyone interested in helping the Help Ariella 2 Walk Appeal is asked to contact Caudwell Children on 01782 600114 or to donate online visit www.justgiving.com/helpariella2walk

Important note to donors:  As long as Ariella requires funds to pay for treatment in the United States, Caudwell Children will manage all payments of funds for the family. All donations made will be added to the Caudwell Children SDR Fund and will be used to help Ariella and other children with Cerebral Palsy in the UK receive this life-changing treatment.

Donating through JustGiving is simple, fast and totally secure. Your details are safe with JustGiving – they’ll never sell them on or send unwanted emails. Once you donate, they’ll send your money directly to the charity and make sure Gift Aid is reclaimed on every eligible donation by a UK taxpayer. So it’s the most efficient way to donate - I raise more, whilst saving time and cutting costs for the charity.