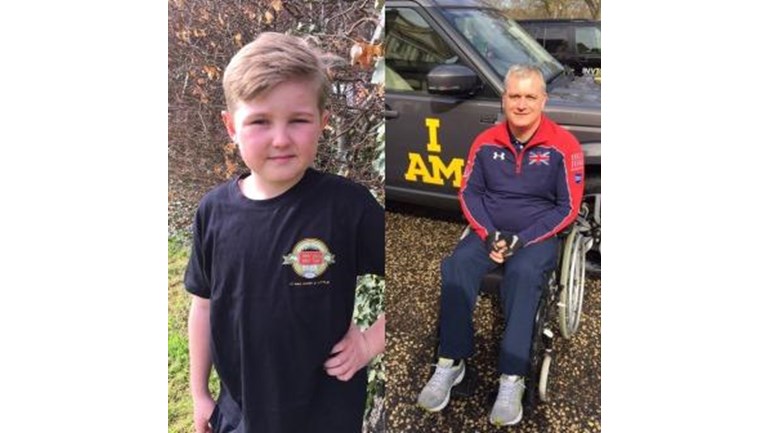 I AM ALFIE, I AM 8 YEARS OLD, I AM GOING TO CONQUER SNOWDON FOR OUR HEROES!

I am going to climb Snowdon for Help for Heroes because I really want to do my bit to support the cause.

We support the wounded, injured and sick to live independent and fulfilling lives.

Hello, my name is Alfie. I am 8 years old and I am going to climb Snowdon as I would like to raise money for Help for Heroes, which represents a cause that I believe in. I have been inspired to do this after meeting a beneficiary, John Prosser ex 2 Para , at the Garrison Sports Centre in Aldershot where I met some of the injured soldiers. Here is my story...6 years ago, I was the youngest fundraiser for H4H and was invited to Downing Street to meet the Prime Minister at the time, Gordon Brown, who thanked me for my hard work - I walked 1 mile in aid of H4H (I was only 16 months old!). In March, I met some of the injured soldiers at the Garrison Sports Centre in Aldershot. Here, I also met Jon and Sarah Flint with their lovely dog Jester from Canine Partners, as well as Anna, Mike and John P. They were all so kind and thanked me for raising money for them all those years ago. I watched John P getting out of the pool and he struggled getting into his wheelchair as it isn't the chair he so desperately needs. This upset me very much but I tried not to show this in front of him. Watching these people with their injuries still fighting on, I felt inspired to raise more money for Help for Heroes. I held my Birthday Party early this year as it is normally in December the 27th but nobody is free and the weather is not so good I therefore had a early Birthday Party BBQ with a Bouncy castle and all my friends from Montgomery Junior School Year £ came and I asked for Donations No presents and raised £206.31 however the best present was a visit from Chris Jones

Army veteran and Help for Heroes ambassador Chris Jones, from Devon, who is supported by the charity’s Plymouth Recovery Centre, was particularly touched by the young fundraiser’s dedication and wanted to do something in return. Chris found out that Alfie was particularly taken by his painting of a wave on display at Tedworth House Recovery Centre after seeing it on a TV documentary about the Invictus Games. The wave identifies the psychological journey that Chris has been on since being injured.

Chris decided it would be a nice gesture to give Alfie the painting to keep and made contact with Alfie’s mum Anja to arrange the surprise. On Saturday Chris attended Alfie’s birthday party in Colchester to present the Montgomery Junior School pupil with the gift.
Could you please find it in your heart to sponsor me please?

Help for Heroes believes that those who put their lives on the line for us deserve a second chance at life for them and their families. The money you donate and the time you give allows us to help them regain their purpose, reach their potential and have a positive impact on society.