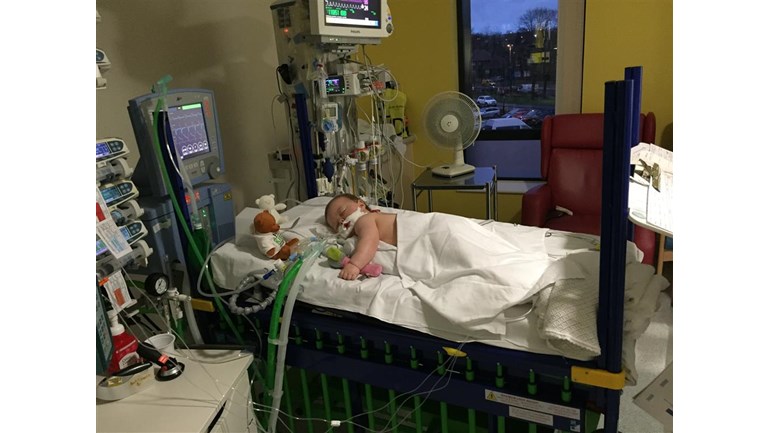 Firstly Thanks so much for taking the time to visit our JustGiving page.

Each year we try to raise some money to support this amazing cause as a thank you for saving our Grace. This year we are hosting a Ladies Pamper and Shopping evening

We are fundraising for the KIDS intensive care and decision support service. They are based at Birmingham Children's Hospital but cover all the North West and West Midlands.

They currently only have funding to have one ambulance with one team (an intensive care Doctor and Nurse) on call at a time. In short:  Hospitals with a critically ill child call them for advice on how to keep the child stable, long enough for the team to arrive, administer care so that the child is stable enough to be ambulanced to a specialist hospital. They also provide advice to doctors and parents of critically ill children, to help make important decisions.

On 25th January 2016 our 10 month old daughter Grace had a respiratory arrest (very luckily whilst i was sat in the doctor surgery with her) and became critically ill.

She was ambulanced to our local hospital but her condition continued to deteriorate, at this point the hospital called the K.I.D.S team for help. At the time, the team were transporting another very ill child to another far away hospital and Grace had quite a wait for their arrival. On their advisory Grace was emergency anaesthetised as her heart began to fail.

The K.I.D.S team arrived like a whirlwind and were the most amazing thing we had ever seen! They had to work on Grace for an hour until she was stable enough on their portable ventilator to be transferred to the first bed available which was at Stoke on Trent university hospital special children's critical care unit.

The journey over was the worst thing as a parent we had ever experienced. Grace needed to be resuscitated a number of times as she struggled to keep fighting. The doctor and the nurse in that ambulance were truly amazing, and we know that Grace would not be here today if it wasn't for them.

When we reached the hospital Grace needed resuscitation again and we were asked to wait in the relatives room whilst a specialist team worked on her. After what felt like hours we were taken to a private room they had put Grace in, and nothing can prepare to see your baby hooked up to full life support and in an induced coma. We later found out we were in one of the four private rooms thats the most critical cases are put in for privacy, as these poorly children have a strong possibility of not making it through. We were asked to advise relatives to visit Grace incase it was the last time they saw her, including her 2 1/2 year old brother Harry, they advised 'so he understood how poorly she was and why she wasn't coming home'.

Once again the staff at Stoke were amazing. She had a private critical care nurse at all times that never left the room. Grace had two viral infections and one bacterial infection that just wiped her immune system out. Other than supporting her and keeping her stable, Grace needed to improve from the viral infections herself. At this point the staff asked if we would like her blessed..

Amazingly our luck turned when the doctor gave her a Blood Transfusion to see if it would help boost her immune system, unbelievably within 12 hours she began to try to fight back and do a little breathing on her own. The nurses were shocked at the complete turnaround and were sure it was down to her being such a bruiser and having plenty of reserves!! She was slowly weaned off the life support and even made it back onto the ward.

The days that followed included a few scares, Including being prepared for Grace to have extensive brain damage, after what she had been through and also as she was not recovering with mobility in her limbs and functioning as they expected.

Now a year has passed and it's unbelievable what she achieved! She has met so many more milestones than expected and improves every day. No one would believe how poorly she has been if they met her now!

There have been numerous hospital stays since then and i'm sure there will be more in the future, but they are becoming much less frequent. Our NHS Consultant is amazing and (touch wood) we seem to be able to manage her health pretty well, with her lungs growing stronger by the day. We are so lucky she is here today,  and so lucky to have access to the amazing NHS and its departments, especially the K.I.D.S

Sorry this has been so long, and if you have got this far thanks so much for reading!! We would really appreciate any sponsorship you can share no matter how small so that the K.I.D.S team can continue saving children's lives.

It's bewildering and unsettling for anyone going into hospital but especially for children and that is why we are a fundraising hospital. We raise funds to enhance the experience of our patients by providing state of the art medical equipment and facilities and creating a child-friendly environment.

Charity Registration No. 1160875
Find out more about charity fundraising