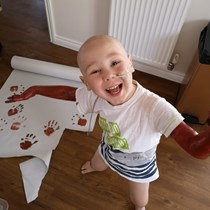 Weʼve raised £157,809 to Save Zac Oliver's life. Get him to Philadelphia and have a chance at life.

This is an incredible story about community spirit and resilience. There is a price on Zac's life and his parents needed to raise £500,000 in less than 2 months. With the help of thousands and thousands of people they have raised £430,000 to date and just need the last bit to get them there.

He was diagnosed in May 2018 with leukaemia, sadly it is a particularly rare and life threatening form – in fact he is the only child in the UK at the moment with near haploid leukaemia. He is on his third cycle of chemotherapy but although it is currently keeping him alive, it will almost certainly not cure him. The next cycle is due to begin in the second week of November which involves a particularly toxic chemical that is likely to lead to his general health deteriorating, stressing his vital organs and reducing the chances of any other treatment being successful. Hence there is such a tight time line to raise this money.

Zac’s parents have put in hours of research and studied medical papers and journals and protocols. They have spoken to professors, and oncologists, scientists and clinical directors. They now know that there is a life saving treatment with about an 80% chance of success available for their son – but he needs to have it whilst his little body is still strong enough to take the shock and deal with the battle that needs to be fought against the cancer cells within him.

Car T treatment has been used successfully in the USA for 5 years and has now been licenced for use in the UK, but even though it has been licenced, the UK is not ready to deliver the treatment here. Every effort is being made to see if something could not be done to accelerate the preparations and for the UK to accept Zac as a patient here, but it is not looking likely that it will be possible within his timescales. The Children’s Hospital of Philadelphia have offered him a place, they need just 4 days notice and the treatment can begin.

However there is an enormous cost - $1,250,000 was the original quote which was subsequently generously reduced to half $625,000 or about £469,000 – this is just the hospital costs and they all have to be paid up front. There will also be flights and costs of living etc. But what would you do for the love of a child? They are not leaving a stone unturned. Nothing is impossible and the power of people coming together to make something happen is extraordinary.

Zac needs to be on a plane in early November really – but in the last six weeks his friends and family have raised almost £430,000. It seemed like an impossible mountain to climb, but the summit is in sight, please help them to reach it and save Zac’s life.