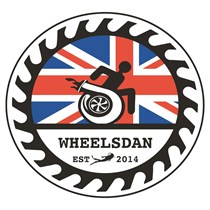 Dan was paralysed in a motorcycle accident in June 2014. After fixation of his spine, he was left a T8 complete paraplegic (from the bellybutton down), so he has no core/trunk muscles or use of his legs.

After his time recovering in hospital, Dan developed a new passion for handcycling and progressed to 5th in the UK! Unfortunately in June 2018, Dan was involved in a second crash, when a car hit him while he was taking part in a 600 mile charity bike ride. This left him with a compression at C4 in his neck.

Despite these two lifechanging accidents, Dan continues to take part in lots of charity events, trying to give back to those who have helped him over the years. Dan enjoys nothing more than breaking barriers and proving that there should be no boundaries when it comes to people with disabilities taking part in sport... or anything else for that matter!

Not one, not two, but THREE scheduled new World Records to take place on 28th September 2022!

Dan has been a scuba diver for 4 years now and has worked his way up to the position of Assistant Instructor! Dan has set himself the new challenge of completing the three below World Record attempts without surfacing...

1. ‘Fastest one mile SCUBA diving in fresh open water with a swimming band’ (the swimming band will be secured around Dan's legs to ensure no movement)

It's estimated that Dan will be swimming with his arms only for around 6 hours! Dan is hoping that he will set all three new World Records, but more importantly, that he can raise a significant amount of money for charity along the way.

Updates on Dan's progress will be uploaded onto this page and documented on his YouTube channel here: Wheelsdan YouTube Channel

Dan is also hoping that the BBC, Spinal Research and Spinal Injuries Association (SIA) will help him to publicise this challenge, with the aim of raising as much money as possible!

Who Is The Event In Aid Of?

MAGPAS Air Ambulance attended the scene of Dan's motorcycle accident in 2014. Without them, it is unlikely that Dan would be alive today. The service operates 24/7 and since 1971, they have treated over 60,000 patients. MAGPAS Air Ambulance is not a state-funded service and relies on generous public donations to continue saving lives.

Why The Scuba Trust?

The Scuba Trust has been a registered Charity for over 21 years and is run entirely by dedicated and experienced volunteers. During this time they have supported many people with a wide range of disabilities, including; Paraplegics, Quadriplegics, Visually Impaired, Deaf, Autistic and Amputees to scuba dive. Weightless and relaxed, freedom from a wheelchair or mobility aid, divers can for a short while forget the world above water. This can be a massive benefit from PTSD, anxiety and many other mental health issues.

After his second accident, Dan had to deal with mental health issues such as PTSD and depression. Without scuba diving in his life, Dan doesn't like to think what might of happened to him, but knows that, after MAGPAS, it was his second life saver.

Stoney Cove is an awesome place to train and dive at all scuba diving levels. The facilities are brilliant for able bodied people, however they're not so great for their disabled buddies. Dan is looking to help change that and would love to donate some of the money raised towards disabled changing facilities being built.

How Can You Help?

Dan would love for this event and fundraising challenge to go as far and wide as possible, so please share with your family, friends, colleagues, neighbours - whoever you can!

As Dan's main aim is to raise as much money as possible for these three worthy organisations, any donation, no matter how big or small, would be so gratefully received.

You can find more information on each of the organisations via the links below: