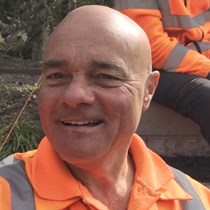 Raising money for military charities and good causes for some 40 years, Frank Roberts is hoping to raise £5,000 with the proceeds from the yomp being split between the Royal Signals Charity and the Swanage Army Link.

Frank Roberts, who lives in Swanage, will be leading a small team, including Daz Perry, Steve Duncan and John & Harvey on the Jurassic Coast March which was set to take place during 2020 – the centenary of the Royal Corps of Signals – but was postponed by the Coronavirus pandemic.

The dedicated Swanage Railway volunteer for 38 years is being joined on the Jurassic sponsored walk by friends and former soldiers from the Royal Corps of Signals.

“The Royal Corps of Signals was to have celebrated its centenary last June but the Covid-19 pandemic prevented all but a few events from happening – including our Jurassic Coast March from Exmouth to Swanage."

“I have been determined to raise some funds for the Royal Corps of Signals charity based at Blandford Camp in Dorset."

“I would like to give something back to the Royal Corps of Signals charity and also help Swanage Army Link record the contribution made by soldiers in our community since 1983. The funds raised on the Jurassic Coast March will be split equally between these two good causes,”

“I am delighted to be supporting Frank who has always worked tirelessly for so many things around Swanage and I would ask the public to support this sponsored walk along the Jurassic Coast for such worthwhile causes.”

After 25 years of service in the Royal Corps of Signals, I have supported the Swanage community for almost 40 years on the Railway throughout.