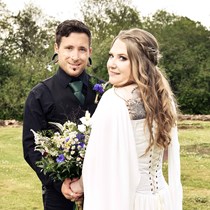 Pete Felton is a 26 year old musician from the West Midlands: he is a below the knee amputee, has beaten addiction and cancer twice, and is a rare inspirational spirit. 3 weeks after marrying he was given a terminal cancer diagnosis. This fundraiser is to support Pete and his wife with the financial consequences of the diagnosis and treatment, as well as to complete his ‘Not Dead Yet Bucket List’ of things to do/see/experience before his health deteriorates to a stage where he is unable. The full story is below…

Two years ago, at only 24 years old, Pete was told by specialists that the pain he had walking was due to a large tumour in the arch of his left foot. Diagnosed as the rare and aggressive Synovial Sarcoma, within a few weeks, in July 2017, he had his left leg amputated a few inches below the knee. Once recovered, he had to relearn to walk using a prosthesis and adjust to life as an amputee and all that that entails.

Instead of going to pieces or turning back to drugs (which he had previously had issues with but was by then in abstinence-based recovery), he picked up his guitar and started writing again. He used music to express how he was feeling to those around him and over 70,000 people watched his video recording of ‘Hollow’ online. He released this song as part of an EP on his 6 month ‘ampu-versary’ to raise money for Sarcoma UK, Teenage Cancer Trust and Changes UK. 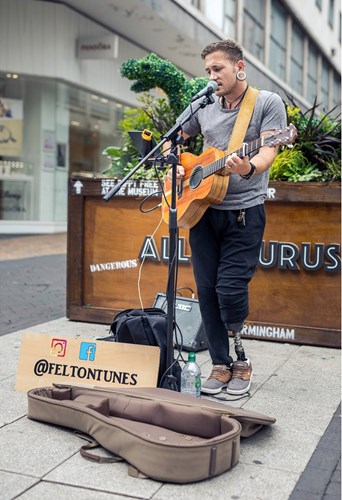 He was unable to return to his previous work of rigging, so given determination by his own experiences, Pete took the chance and became self-employed as a full-time musician: busking, playing gigs and events. He recorded and released more of his own music, spent the summer building his performance busking in the streets of Birmingham and Stratford-upon-Avon, spent time decorating his flat and even got engaged to his now wife who had relocated from Belfast to be with him.

He was asked to appear on the first episode of All Together Now (broadcast Mar 2019), performing for the first time without his guitar. What the audience and judges weren’t aware of, is that an hour before going on stage, Pete had the phone call from his Oncology team to tell him his cancer had returned and he would require lung surgery. Advised that the surgery could affect his lung capacity and there was a risk to his vocal chords, Pete made the decision to go ahead with the performance, knowing that it may be the last time that he could. He also took part in their BBC 3 short documentary focused on how music has helped him cope with his cancer and amputation. Watch the BBC documentary here 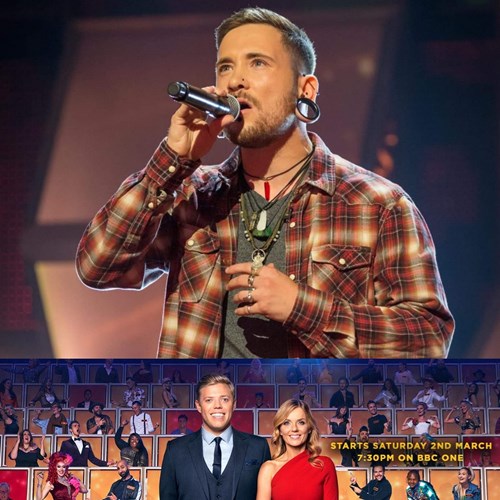 A few weeks later, in November 2018, he had part of his left lung removed to get rid of the 2 tumours, later diagnosed as Synovial Sarcoma, the same cancer that had been in his foot. Three months later his routine checks came back as no signs of cancer, but he was very aware that this type of sarcoma is little understood, difficult to cure and high risk of reoccurrence.

Pete tried to get on with life, busking regularly, playing in bars and restaurants and recording. He was booked for his first festival and was planning his wedding. There was a further cancer scare shortly after this, where doctors believed they had found a tumour in his brain following an MRI, however only the week before his wedding this was confirmed to be a flaw on the scanner.

In May 2019, Pete married his fiancé, Hollie, in an intimate outdoor ceremony amidst the remnants of Weoley Castle Ruins, surrounded by the family and friends who had supported him through the hard times. The day was beautiful and their happiness shines through in their photos. Pete played his first festival booking on his return from honeymoon and his calendar was filled with bookings and a plan for a summer of busking, his busiest time of year. 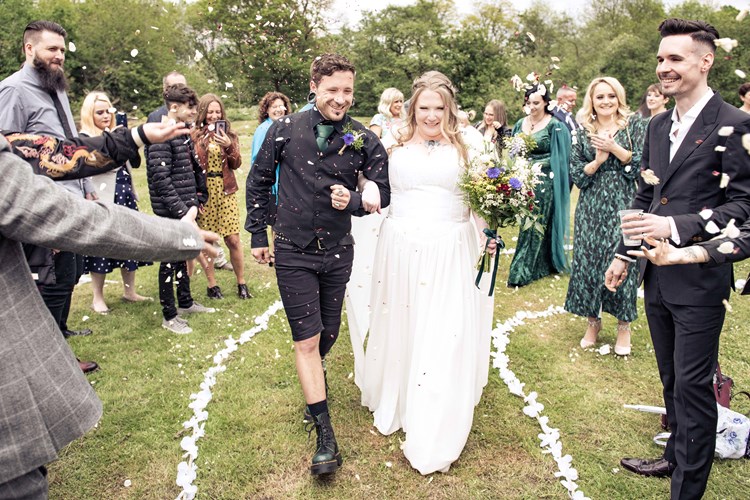 Then came the phone call. The scan which he had a few days before the wedding had shown that the cancer had again returned and the prognosis was poor. There were tumours throughout both lungs, in the lung lining and signs of cancer throughout his abdomen including the lymph nodes under collarbone, armpit, around diaphragm, lungs and heart.

It was again the same Synovial Sarcoma and it was terminal; it was inoperable and no treatment would cure him. They could feel their world crumbling around them.

After discussing options with his Oncology team, it was decided to attempt a round of Chemotherapy to try to slow down the growth and spread of the cancer. It is difficult for doctors to gauge a timeline as there is so little information on Synovial Sarcoma, but advised that the average for the limited amount of cases is 1-2 years if the chemotherapy is successful, and substantially less if it is not.

A barrage of tests and scans followed in preparation. Being 26 years old and newly married, it was important to the couple to also store sperm ahead of the treatment. Pete made the decision to keep one of his bookings for the weekend before the planned start date of chemotherapy and invited all his family and friends, knowing that this could be the last gig he would play. Following on from respiratory symptoms, during a scan it was discovered that his left lung had filled with fluid. In a rush to clear it before starting his treatment, Pete was forced to cancel his last gig and admitted to hospital to have 1.3l of fluid drained.

On 2nd July 2019, Pete commenced his Chemotherapy. As I write this (same day) he is awaiting the onset of the side effects and hopeful that he will be able to tolerate the treatment. If he can tolerate it, he will have all tests repeated after 9 weeks to ascertain if it has slowed down the spread and determine whether we continue with treatment. 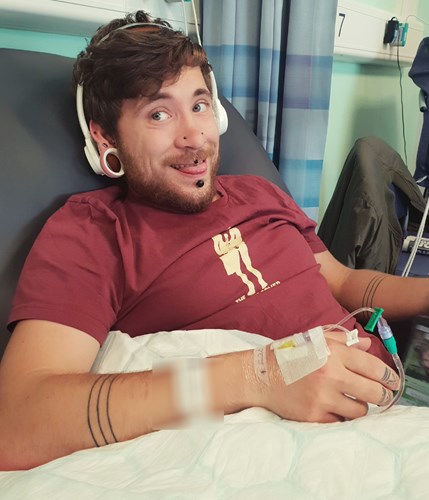 Pete, not being one to let cancer beat him down, is determined to make the most out of every day he has left. He has made a so-called ‘bucket list’ of things he wants to do/see/experience while he is still able. The list includes simple things such as ‘try a sensory deprivation tank’, ‘fly birds of prey’ and the more adventurous ‘visit New Zealand and Australia’ (full list below). Of course, there is a cost involved with completing most of the items.

Unfortunately, as well as the obvious emotional toll that this news continues to take on the couple and their families, there are practical consequences. With the treatment plan and prognosis, Pete has had to cancel the majority of his bookings and busking plans for the foreseeable. Being the busiest time of the year for a self-employed musician, this has resulted in a major loss of income. His summer income was going to help pay off wedding costs, pay the normal household bills and some set aside toward the rest of the year’s bills. His wife, having been on sickness absence since this recent prognosis, made the decision to resign from work in order to care for him during his treatment and spend as much time together as they can in the coming months.

A NOTE FROM PETE’S WIFE

Six weeks ago I married the most amazing soul I’ve ever met, and we started out on the next part of our journey. It was the most perfect day and our hearts were full. Now we face our story being cut short.

Life is not fair for anyone, we all understand that, but after all that Pete has already endured, and conquered, I cannot help but feel what is happening to him is like someone stamping on a butterfly… He is a beautiful spirit, a kind heart, with a soul of stardust.

We won’t be able to cure his cancer, but we can help him live the life he has left… Thank you to all of you taking the time to read Pete’s story and massive thank you to anyone who chooses to contribute to this fundraiser – each and every one of you are amazing!

As well as keeping this page up to date with progress, Pete and I will try to document both this new cancer journey, the challenges and completing his bucket list on our new Instagram page: @ndybucketlist

Should you wish to get in touch with us directly you can also contact by email: notdeadyetbucketlist@hotmail.com

Love to you all, Hollie Felton x

WHAT YOUR MONEY WILL GO TOWARD

The money raised from this fundraiser will be used as follows:

1. Paying for tickets, travel and experiences to complete Pete’s ‘Not Dead Yet Bucket List’ .

2. Unexpected and/or increased bills associated with diagnosis and treatment.

3. Donation to fund places for young people with cancer on the CLIC Sargent Music Service.

Should there be money raised in excess of what will cover the above, or if Pete’s health deteriorates too fast to complete his ‘Bucket List’, the money may be used in future to support IVF treatment for his wife after his passing.

All items will be subject to his health and ability at the time and so more than a few may not be feasible when the time comes.

1. Camp overnight in a haunted house.

2. Spent a weekend on a barge.

6. Record all my original songs.

8. Record a number of cover songs.

13. Session in a sensory deprivation tank.

14. Wife finish reading me The Lord of the Rings.

15. Get matching tattoo with wife.

16. Ride horses along a beach or wood.

18. Do busking trip along south coast.

19. See the sunrise from Stonehenge at Summer Solstice. - COMPLETED

20. Store sperm for after chemotherapy/after pass.

22. Do a meditation retreat.

24. Carve initials into a tree.

25. Go back to where had honeymoon, Galgorm Spa.

26. Go to Sea Life centre where had first date.

27. Visit cousin in Colorado (if unlikely to make his wedding Jun 20).

34. Be able to sit on own porch overlooking wildflower garden.

I am raising funds to help my husband complete his 'bucket list'. He was diagnosed with terminal cancer at the age of 26, only a few weeks after we married. I want to make sure he can 'live' the remainder of his life as much as possible!