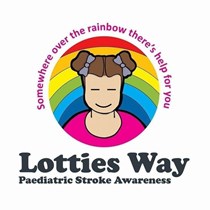 Weʼve raised £335 to Lottie with friends and family will be completing the North West Stroke Association Step Out walk on 15th July 2017.

On the 26th July 2016 Lottie aged 3 from Warrington in Cheshire was on holiday in Wales when she became unwell. Lottie's parents took Lottie to Bangor hospital where she had 2 CT scans through the night, Lottie had suffered a stroke. Lottie was transferred via ambulance to Alder Hey children’s hospital the next day where she spent 2 weeks as an inpatient in the neurology ward having a number of tests and scans to establish the damage of the stroke, after a number of tests we found out that Lottie's stroke was caused by the Chicken Pox Virus.

Lottie is taking part with family and friends in the Stroke Association walk on 15th July 2017 Step Out. Lottie will be cutting the ribbon and starting the walk. Funds raised will be split between Lottie's Way and Th Stroke Asscoaition.
Whilst in Bangor hospital when Lottie was diagnosed her parents were told that there was a strong possibility that Lottie would not recover and we was faced with the possibility that Lottie may never walk or talk again.
Lottie has right sided weakness and over the past few months Lottie has significantly improved however she has spent the last few months having facial palsy, occupational, physio and speech therapy.