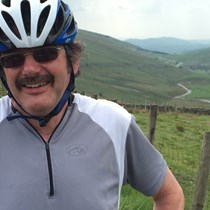 Isle of Man
Emergencies
Funded on Sunday, 31st May 2020

In May 2018 for his 60th birthday challenge John set off to cycle around the coastline of Great Britain. He had cycled 4108 miles in 58 days. With only 110 miles to go until he reached the ferry home he had a major accident. He smashed into a road sign damaging internal organs and breaking his pelvis, shoulder, and seven ribs. After six operations, ongoing physio and shear determination in May 2020 he will be completing the remaining miles with a group of family and friends. The 1 Coast 1 Post 1 Finish ride will be raising money for the North West Air Ambulance service who airlifted John to Preston Trauma Unit, and Bowland House, a charity which provides accommodation for relatives of ill and injured patients at Preston Royal Hospital, free of charge. Any donations are greatly appreciated.

In 2018 I turned 60 and wanted to mark it by challenging myself with a bike ride. Lands End to John o’Groats was too obvious and having recently read “One Man and His Bike”, a cycle around the coast of Great Britain was a challenge worth doing. After leaving my job I left the Isle of Man on 17th May 2018 and started heading South off the boat at Heysham Port. The cycling was fantastic through Wales, down to Cornwall, along the South Coast, up the East coast and into Scotland in no time. The weather was beautiful and I was really enjoying myself. I continued up to John o’Groats, took in a few of the Western Islands and came down the west coast of Scotland taking in the beautiful scenery, into the Cumbria coastline. Just outside Whitehaven I had cycled 4,108 miles over 58 days, and had approximately 100 miles to finish the trip, when it all went wrong.

I was distracted by a cycle path sign and unexpectedly hit a speed bump which threw the bike and I onto a gravel/grass verge, and ultimately into a double-posted road sign. Laying there unable to breathe thinking I was going to die, I realised I could in fact breathe as I asked a passing motorist to phone for an ambulance. The ambulance duly arrived and in reply to the paramedics questioning I said “Everything’s in pain, have you got any big drugs?”. They didn’t, so the Air Ambulance was called and arrived in no time at all. I received some strong painkillers and then I woke up nine days later, in Intensive Care.

The extent of my injuries were complex: Broken pelvis; seven broken ribs; broken shoulder blade; torn rotator cuff; spleen and a section of bowel removed. Further hospital complications also arose during my seven week stay at Preston Royal Hospital. This hospital is a major trauma unit for the whole of the North West, with specialists in all fields at hand. My wife Sue came over from the Isle of Man and due to the distance from home she was able to stay in Bowland House for the full seven weeks which was an absolute godsend. This accommodation is on site at the hospital for relatives of intensive care patients, cancer patients having treatment and neonatal babies' family and is completely free. My sister initially came over with my wife for the first week and was able to stay there too.

The North West Air Ambulance was critical to my survival and Bowland House were extremely helpful and generous to assist Sue in such a distressing time. The North West Air Ambulance is a charity organisation funded by the generosity of the public through donations, fundraising activity, lottery membership and a network of retail outlets. They have a fleet of three helicopters including the Helimed 72 from Barton (doctor and paramedic) which came to assist me, on the 17th July 2018. One minute of fuel costs nine pound so it is a very expensive operation run.

During my time in hospital many people were commenting if I was looking to ride my bike again. I decided I would in the future complete the rest of the coastal journey and raise money for these two organisations. After 18 months of ongoing surgery, physio and hospital visits, exactly two years since the start of the adventure I will be completing the journey on the 16th and 17th May 2020 with a group of family and friends.

Thank you for taking the time to read this, and your donation would be very much appreciated.