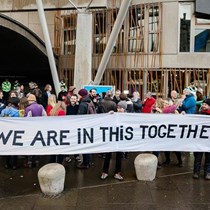 I am here because I am scared. I am fighting because my future is being stolen, and I stand in solidarity with those who have already had their present taken from them.

The donations in the lead up to the October International Rebellion have smashed past our target of £10,000! Help us get to £15,000!

A year after our initial Declaration of Rebellion, we are again taking the streets of cities across the world in our second International Rebellion. This is how we win. We are all crew, and every single rebel is vital.

Extinction Rebellion Scotland will be taking the streets near the Department of Business, Energy and Industrial Strategy, highlighting the links between government, corruption and the crimes of fossil fuel corporations.

We demand that the government act now on tackling the climate emergency to avert the complete breakdown of the global climate and ecosystem. We have little time left.

We must lead the way in creating a carbon free economy. We demand that we act now and reduce carbon emissions to net zero by 2025.

We stand in solidarity with all those displaced throughout the world. We ask that all refugees are treated with respect and that their human rights are upheld.

We stand in solidarity with all activists fighting for a better future.

Extinction Rebellion Scotland is a non-violent direct-action movement formed to take urgent action in the face of climate emergency and ecological catastrophe, as part of the global justice movement.

The funds we raise will be used to cover arts and materials to keep our pressure on the government. They will also help us cover the costs of outreach activities to engage more people, and to make our movement ever more inclusive and accessible for all.

Our demands, issued as a Declaration of Rebellion to the Scottish Parliament and Scottish Government on 24th November 2018 are as follows:

That the Scottish Government tell the truth about the climate and wider ecological emergency, acknowledge and reverse any policies that help drive the climate crisis, and commit to enabling a rapid and just transition to a sustainable and fair society.

That the Scottish Government enact legally binding policy measures to reduce carbon emissions to net zero by 2025, including by replacing a system based on accelerating consumption with one based on ensuring the wellbeing of all.

The creation of a Scottish Citizens’ Assembly to oversee the changes, as part of creating a democracy fit for purpose and a society that cares for all.