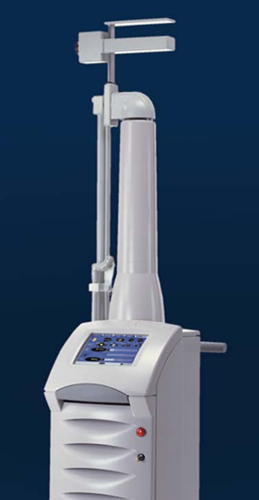 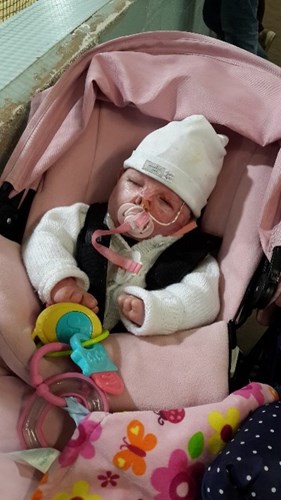 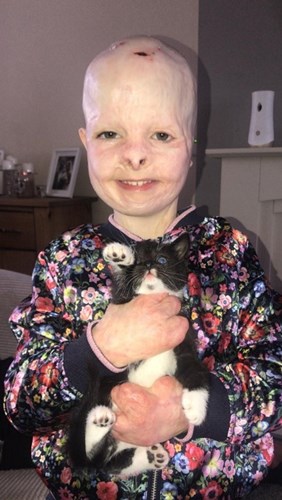 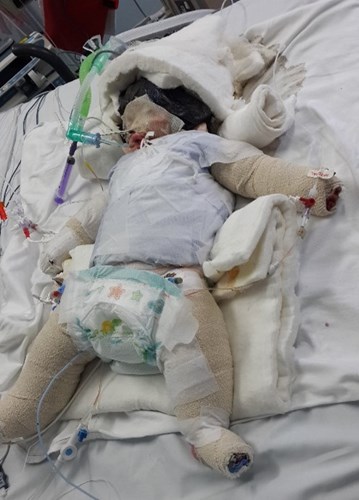 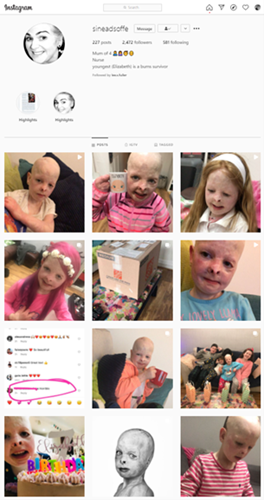 This year Elizabeth has decided to raise money for a CO2 laser machine for Birmingham Children’s Hospital. This machine will benefit not just children with burn scars but also children with scarring from operations and other accidents. The machine is very expensive but Elizabeth is determined and she is used to getting her own way 😉

When she was six months old and living in Qatar Elizabeth Soffe’s cot caught fire when an air conditioning unit malfunctioned. She was severely burned and was extremely close to dying. Luckily, she was taken by air ambulance to Birmingham Children’s Hospital where she underwent weeks of complex plastic surgery and reconstruction operations. Miraculously Elizabeth survived weeks in a coma and months recovering in the Burns Centre at BCH.

Elizabeth’s injuries are significant. She was burnt down to her skull leaving her without hair. She lost one of her ears and a lot of her nose. She received full thickness burns to 60% of her body. She lost most of her fingers. In the 7 years since the fire she has had over 70 operations; Reconstruction of her face and hands, skin grafts, releases of skin grafts and laser treatment. She has daily physiotherapy and occupational therapy to treat her scars and ensure her range of movement is maintained and she will need many more operations as she grows up.

Despite all of this Elizabeth has grown into a remarkably confident, happy and wise seven year old. She is the most enthusiastic child imaginable, exhausting those around her. Even the most optimistic person could not have imagined in the days after the fire that Elizabeth could walk into a new singing class or gymnastics class with the belief in herself that she shows.

Elizabeth has shown a keen interest in engaging with others who have also suffered scaring and disfigurement and is an Ambassador for the Scarfree Foundation working to eradicate scars and has also worked with the charity Changing Faces to raise awareness of how people with disfigurement are treated. Elizabeth also shares her thoughts on her mother’s Instagram page.

If you would like to know more about Elizabeth some links are below.

Fractional CO2 Laser treatment is a treatment using a particular type of laser machine to break up scar tissue. During treatment a surgeon uses the machine to create microscopic holes in the tissue of a scar. This energy is thought to stimulate changes in the scar tissue allowing it to reduce in size, texture and colour, making it less visible.

Laser treatment is most appropriate for thick, raised scars. These scars — also known as hypertrophic scars — result from abnormal or excessive healing. They are often red or inflamed and frequently cause significant functional impairment. For example, the scar may make it difficult for you to bend a joint. Hypertrophic scars can have many different causes; burns, accident injuries, operations etc.

While laser treatment will not completely remove scars, it can improve functional abilities lost due to scarring. Scars will often soften leading to less itching. The appearance of scars may also improve after laser treatments.

Laser treatment can be part of a more comprehensive scar treatment program tailored for you but most importantly scars are causing restricted movements it can reduce or remove the need for more invasive and risky scar release or skin graft surgery.

Currently there are CO2 laser machines at the Queen Elizabeth Hospital in Birmingham and at Bristol Hospital but both of these serve adults only. At the Birmingham Children’s Hospital there have been a very limited number of sessions for children undertaken using a machine on loan.

The proposed CO2 laser machine Elizabeth Soffe is raising funding for is the Lumenis UltraPulse® shown above. Purchasing this fractional CO2 laser machine for the Birmingham Children’s Hospital would open up this treatment for all children who have a hypertrophic scar, not just from a burn injury but from any trauma or operation. The treatment may reduce the visibility of a scar, the itch associated with this type of scaring and prevent some of the functional issues associated with scarring. In turn this may reduce the number of operations a child needs to endure.

Elizabeth will be a beneficiary of the machine but it would be used for many children across all medical specialities at Birmingham Children’s Hospital and beyond. There are very few paediatric burns centres in the UK so many children from across the country are treated at BCH. In addition, Irish children with severe burn injuries are often transferred to UK burns centres including BCH. This machine has the potential to benefit a great many children.

The cost of Fractional CO2 Laser machines is between £130,000 - £150,000. However, given the number of children that pass through the BCH Burns Centre annually and the number of children at BCH who have scars as a result of other trauma and operations, the cost per child treated using this machine would be small.