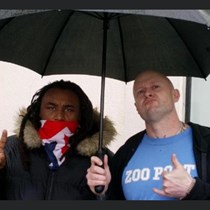 Weʼve raised £785 to Support much need services within the Newport Community. Money will be raised for Eden Gate Night Shelter and food banks in Newport.

All money raised will be donated to Eden Gate Night Shelter and food banks in Newport. Don't want the song but want to donate...please do here!

Eden Gate exists in Newport for those who find themselves vulnerable, either because they have no home or because they are trapped by drugs or alcohol (or sometimes both). Nobody has to feel vulnerable when there are hands willing to help.

‘Ebony and Ivory’ was originally released in 1982 by Paul McCartney and Stevie Wonder. It was released on March 29 of that year. The song is featured on McCartney’s album Tug of War. A self-empowerment hit that struggles issues of racial equality, the song reached number one on both the UK and the US charts.
It is an idea that has been bouncing around for a little while now, but Benji and Beddis finally went into the studio to record the song last year.

“We all know that people are the same where ever you go, there is good and bad in everyone, we learn to live, when we learn to give each other what we need to survive, together alive. Ebony and ivory live together in perfect harmony”
As poignant now as the day they were written – if not more so.

Both Benji and Beddis are stalwarts of the Newport punk scene. Benji Webbe came to fame as frontman with local outfit Dub War in the 1990s, laying his reggae/raga vocals over the top of the band’s full on punk-metal sonic assault. When Dub War split in 1999 he went on to form Skindred who have since gone on to international fame. Dean Beddis will be familiar to anyone that knows anything about the Newport punk scene. His band the Cowboy Killers spawned moshpits up and down the country in the 90s and the irreverent ‘Las Vegas Elvis shows the world how tribute acts should be. The backing track is provided by a bunch of fellow partners in crime from the Newport scene, including Richard Glover of Dub War and Bad Sam.

Please give what you can to support much needed services within Newport Community. One Love. B & B

Two legends of the Newport punk scene, Benji and Beddis, have joined forces to release a cover version of ‘Ebony and Ivory’ to raise awareness of, and money for, local Newport charities. The duet belt out the lyrics with passion in their own inimitable raga/punk styles.