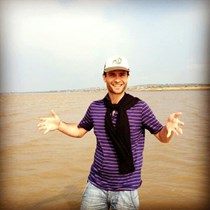 As an expat Aussie living in Norwich, UK I feel a long way from the pain and struggles of my countrymen. This charity page is my attempt to create a community response from this side of the world to help the communities that have been ravaged in Australia culminating in a Charity lunch on Sunday 26th January at Farmyard on St Benedict's St, Norwich. They have generously allowed us to take over the restaurant for the day to host a casual meal which is being supported by local businesses in aid of raising as much money for Charities helping people and wildlife affected by this catastrophic bush fire season.

*To be fully transparent, I have decided to do a personal fundraising campaign instead of directly to a charity so that I can split the funds raised in the campaign evenly between my two charities. This platform doesn't seem to have that ability at this point*

Blake Bowden was raised in Northern NSW on the east coast of Australia, he’s a vastly experienced chef turned cheesemaker who has settled in Norwich