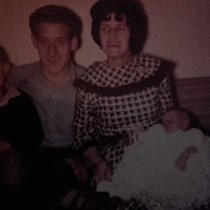 Weʼve raised £2,367 to Fly Tom back from Las Palmas, Spain. He Fell into a Coma in May after having a Fall Caused From A Seizure on The Brain, Him having a Stroke.

Tom is now out of The Coma, He got a Virus when in hospital, which he is now clear of. The Bleed on the Brain Has dispersed However Tom is Paralysed down his complete Right Side and He is Unable to Speak. The Spanish Hospital are Now Saying We can do No more for him and wont Put him through Rehabilitation, They Say its not there problem He needs to Go back to Uk. We have asked Uk for help they say they do not cover re-patriation, We are unable to pay this ourselves as there is only my brother and I, They are just leaving him laying as he is in the hospital over there. I do not know which way to turn, So I am asking for help. I just feel that at 57 years of age he still has his life ahead of him. He was a fit man who has lost 5 stone in weight since being in the coma, The Hospital over there asked me if I believe in Just letting him go. He is so responsive, He smiles, He cries, He is still my Brother.

from Las Palmas to Sussex