We have just had the most amazing news that all of Anna's tests and scans have come back clear so she has finished her Immunotherapy treatment in New York!

Her care will continue in Dallas for the next few months until we can return home.

We are so relieved and so grateful for everyone’s support ❤️

We have received great news from MSK that Anna’s blood results are all good again and we can start her fifth and final round of Immunotherapy on Wednesday 17th June. They and us are amazed at how quickly and how well she is getting through it, avoiding the long delays we were expecting due to both her response to the treatment and also the challenges of the coronavirus situation and lockdown.

On the 29th June she will have another full set of scans which we desperately hope will all be fine and clear then her treatment will be complete!

We’re delighted to say that because Anna has coped with treatment so well, without any complications, extra treatment or emergency admissions, the money raised so far has covered her treatment and there are no further costs to pay MSK.

Initially we were told we would need to have regular follow up visits here in New York until 4 years post treatment but this has been revised and they’ve now said we can continue regular monitoring, check ups and scans remotely as long as it’s with a hospital that they can communicate effectively with and receive quick results from. Unfortunately this isn’t possible under the NHS so we’re currently contacting private hospitals to arrange this, but it will cost significantly less to do than regularly returning to the US.

Any donation amounts remaining in Anna’s fund or further donations received will be used to support this ongoing care and provide a safety net for any unexpected future costs.

Some of you may already know that Anna’s sister Ellen has also been dealing with her own health issues recently. In late November while we were in the thick of fundraising for Anna’s treatment, we found out that Ellen has Scoliosis, curvature of the spine. It was a huge shock to us all and we found it difficult to deal with the prospect of another of our children having medical problems. We met with surgeons in the UK before we left and then here in New York when we arrived and we were facing the prospect of either very long waiting lists on the NHS which would significantly affect the overall outcome of the surgery or having to raise $300,000 for surgery here in New York. On top of dealing with Anna’s cancer treatment, it’s been tough.

But through an amazing lady called Barbara at the Candlelighters NYC cancer charity, we had a chance introduction to a wonderful family from Dallas, Texas. One of them happened to be a nurse for a top Scoliosis surgeon and to cut a very long and remarkable story short, Ellen has been approved for funded surgery in Dallas on 14th July. We cannot believe our luck. We are overwhelmed by the incredible support and kindness we have received by so many people. It is impossible to put into words how grateful we are. Really difficult times have actually shown us how much good there is in the world, it seriously far outweighs the bad.

So if Anna’s scan results are all good at the end of June then we’ll be saying our goodbyes to the wonderful city of New York and driving the 1500+ miles to Texas to embark on another new chapter in our crazy lives. Anna will have some of her follow up appointments there until we can hopefully return home in September with 2 healthy children. 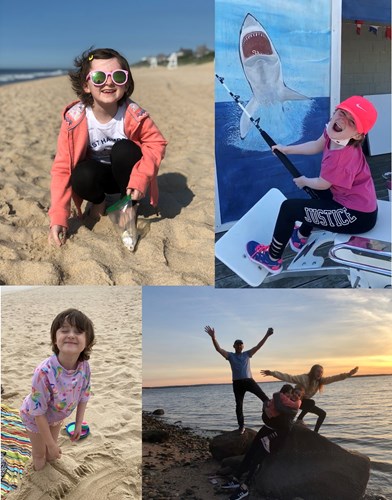 Thanks to Barbara at Candlelighters NYC Children’s Cancer Charity for a blissful and very welcome weekend break from the city and Anna’s treatment.

We are delighted to say that Anna is in New York and started her Immunotherapy treatment on Wednesday 22nd January.

Through the huge efforts and generosity of our local and wider community and with an incredibly generous anonymous donation made directly to MSK hospital in New York, we have reached our target and paid the treatment deposit of $500,000.

We are immensely relieved to have reached this point and we're very grateful that fundraising is ongoing to support additional costs as we now know that Anna's treatment is going to take longer than the 5-6 months we were initially expecting, possibly even up to a year. Delays are also expected due to the Coronavirus situation and lockdown.

After treatment, Anna will need to come back to MSK regularly for follow up appointments and tests, including monthly visits for the first year.

Thank you to all of our Team Anna champions near and far, we are overwhelmed and incredibly grateful for everyone's continued support.

In February 2017 we were told the devastating news that our beautiful 5 year old daughter Anna had Osteosarcoma, a rare form of bone cancer. In that moment our world and life as we knew it changed forever. Since then, Anna has endured 3 years of gruelling treatment. She's undergone numerous intensive rounds of chemotherapy each lasting almost a week at a time and had major surgery to remove the large tumour and whole humerus from her left shoulder and arm which was replaced with the fibula bone from her right leg. This resulted in her spending a long time in a wheelchair and needing daily physiotherapy to walk again and be able to move her arm. Due to her bones being weakened and thin from chemotherapy, she's also suffered fractures in her leg and in the new bone graft which took many months to heal.

For a few months in 2018, Anna had a brief spell in remission in which time she grew stronger and became more mobile, even managing to walk to school some days as she's always determined to spend as much time as possible with her beloved friends. She kept saying how she loved feeling “normal” again. We attempted to get our lives back on track and regain some happy home life and stability for Anna and her sisters Sarah & Ellen, but unfortunately this didn’t last long. In November 2018 we discovered Anna had another tumour, this time in the soft tissue in her shoulder. Telling her this news was heartbreaking. She was so scared at the thought of going through it all again, and of losing her beautiful new hair. At this time, she was transferred from Oxford to RNOH Stanmore and underwent more surgery the week before Christmas 2018 to remove the tumour then started five more intensive rounds of chemotherapy and six weeks of daily radiotherapy all at UCLH in London.

She is currently in remission for a second time but undergoes regular MRI and CT scans as the risk of further recurrences is extremely high and very likely. The NHS has helped us enormously since Anna's diagnosis and we are truly grateful to each and every person who has helped us and cared for her but we have to be realistic and recognise that treatment options in the UK are now very limited. Therefore, we have researched all options and treatments worldwide and Anna has been matched to a new targeted therapy treatment for the prevention of recurrence of Osteosarcoma at the Memorial Sloan Kettering Cancer Center (MSK) in New York, for which she has now been approved. The treatment is expected to take approximately 6 months.

There are links to read more about MSK and the official trial description below but this is a brief explanation of what the treatment is:

Cancer cells have a protein on their surface called GD2 which prevents our immune systems from detecting and attacking them. This new immunotherapy treatment uses an Antibody called Humanised 3f8 which attaches to the protein and focuses our immune system to detect and attack the cancer cells, it also uses a Protein called GM-CSF which increases the number of white blood cells, makes them better able to kill cancer cells and also makes the Humanised 3f8 more effective.

Throughout all of Anna's treatment she's remained our funny, caring, life-loving bundle of joy, crazy about Olly Murs, Minnie Mouse, hippos, rainbows, unicorns, art, France, Mamma Mia nights and most of all her beloved toy “Puppy” who manages to appear in just about every photo and hasn't left her side throughout treatment. Even when she's felt really poorly from chemo or been in pain she's always remained positive and has been determined to get through it and at the same time try to help others.

She has raised thousands for the Oxford Hospitals Charity by taking part in the OX5 RUN (click to see video) She happily took on the role of their poster girl and promoted the run through radio, television and newspaper interviews. As Team Anna, 50 of our amazing friends and relatives completed the run with us, all wearing the craziest wigs we could find in support of children going through cancer treatment and suffering hair loss. The charity recently invited Anna to meet Prince Harry at the John Radcliffe Hospital in Oxford, where they told him about Anna being their OX5 RUN’s top fundraiser. She has also helped other cancer and children's charities through promoting their fundraising activities as she is always determined to give back and say thank you for the care she has received.

Along with her psychologist at the hospital, Anna has created superhero names and characters for cancer medicines and treatments which are being produced into superhero treatment cards so that other children, their families and medical professionals can use them to lessen the fear of procedures and treatments.

But although Anna loves helping others, she's now the one who needs help. We find ourselves in the incredibly difficult position of having to ask for help to fund her treatment and this is really hard for us to do, but we have to, for Anna.

Sincerest thanks for your support.

Please view the video links below to see messages of support to Anna and a few videos created during her treatment:

A special message to Anna from the wonderful Jack Savoretti

Anna and Dad playing the piano

Once we are confident that Anna has completed all her treatment and follow up care, then any amounts remaining would be donated to Osteosarcoma research related charities and groups dedicated to making a difference to children like Anna.